What a nice long and enjoyable break from blogging after Blaugust. It wasn’t really my intention to take an entire month off following that craziness.  It just sort of happened as it usually does i suppose with me. That’s alright though, for i have returned to share more of my super exciting and intimately boring online adventures with the interwebs and a few crazy fellow bloggers. Prepare for the worst and be thoroughly surprised i say.

This time around my lack of blogging didn’t mean my gaming also took a hit. I’ve actually been playing a heck of a lot of GW2 for the last month or so and really enjoying it again. The last time i posted i decided i was going to play my Reaper full time. That lasted all of a week before i switched back to my Warrior yet again. Reaper made everything so easy and trivial that i was starting to get bored with it. So now i’m back to what i always fall back on and i’ll be sticking with it for a while. At least i have for the last month so far.

This meant that i had to go back and finish up some story missions that i either neglected or had to do over again on my Warrior for the first time. To be honest, i pretty much did almost every single story mission from Heart of Thorns and Path of Fire. I’m not much of a story guy when it comes to my MMO’s as i prefer to create my own rather than a predetermined one, but i kind of enjoyed myself and i semi know what’s going on. If you quizzed me i’d probably fail but that’s just how i am when it comes to any MMORPG narrative. 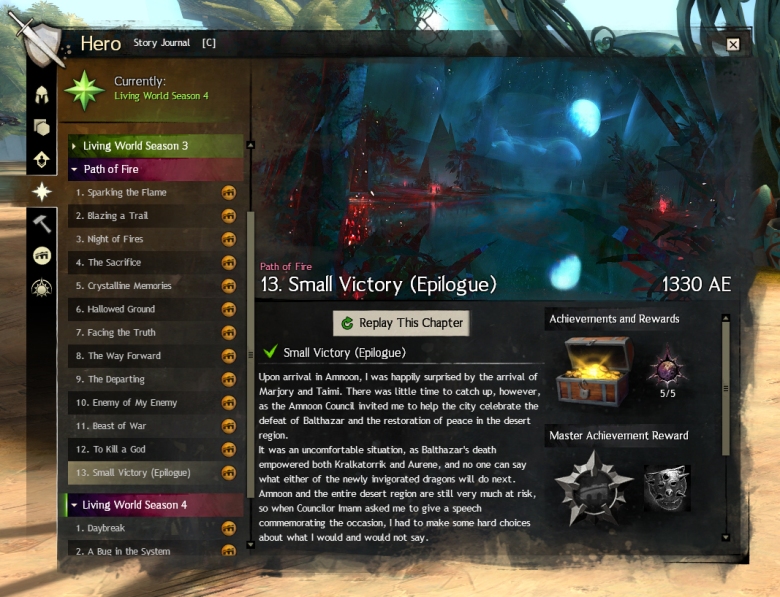 I have to say i found the Heart of Thorns missions much more challenging and of course more rewarding upon completion. This actually surprised me a bit because i remember not enjoying that expansion overall as much as Path of Fire. This of course probably has to do with the introduction of mounts more than anything but it is what it is. I now have to go back and do all my Living World missions as i don’t think i’ve done any, like ever! I know this is out of order and all but i think i’ll get over it. Bring on the story.