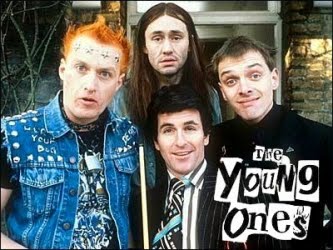 What do you get when a hippie, a cool guy, an anarchist, and a punk share a house at a University in the Thatcher era Britain of the early 80’s? Well you get the political comedy that has to be my all time favorite BBC show. Though it only ran for 12 episodes, it left it’s mark as one of the most over the top and ridiculous comedies ever.Every episode also had a musical guest ranging from Dexys Midnight Runners, The Damned, and Madness, to Motorhead.

The con artist who always has a plan for making money. The leader of the group and a ladies man.

Self-proclaimed anarchist.  Rick writes poetry and calls himself “The People’s Poet”, believing himself to be the “spokesperson for a generation”. 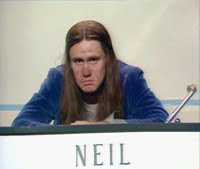 The hippie, is a clinically depressed, pacifist, vegetarian and environmentalist working toward a Peace Studies degree. Neil is a pessimist and believes everyone and everything hates him.

This has to be my favorite episode. The lads find an atomic bomb that happens to have landed next to their fridge and try to exploit the situation.
A young Hugh Laurie, Emma Thompson, and Stephen Fry in this episode.