Posted on October 30, 2013 by Ald Leave a comment
Some days i can’t help but stare at my little Raptr widget on the front page of this blog and shake my head.  It plain disgusts me sometimes, and not because of the ridiculous hours i put into MMO’s.  It’s a hobby and i enjoy the genre along with all the games i play.  What annoys me more than anything is what’s at the top spot and will probably continue to be there for a while to come.
http://raptr.com/badges/last-most/Alderaan
It drives me nuts that Aion is at the top spot as I’ve grown to really dislike that game and the time i spent playing it.  I believe the game itself lasted me an entire year, which ironically is longer than any MMO has lasted me since.  That’s another topic altogether and a rather complex one at that.  It doesn’t change the fact that i wish i could have that time back but a silly wish is silly.
The actual top spot should really be Final Fantasy XI which i lived and breathed for way too long.
Unfortunately there was no Raptr back then and i’d only started using Xfire briefly towards the end of my run.  I put a ridiculous 1300 game days played into that game which comes out to something like over 31,000 hours played.  This is the last screenshot i actually have with my play time checked from early 2010 (ignore the terrible spelling of my name due to server transfers screwing it up): 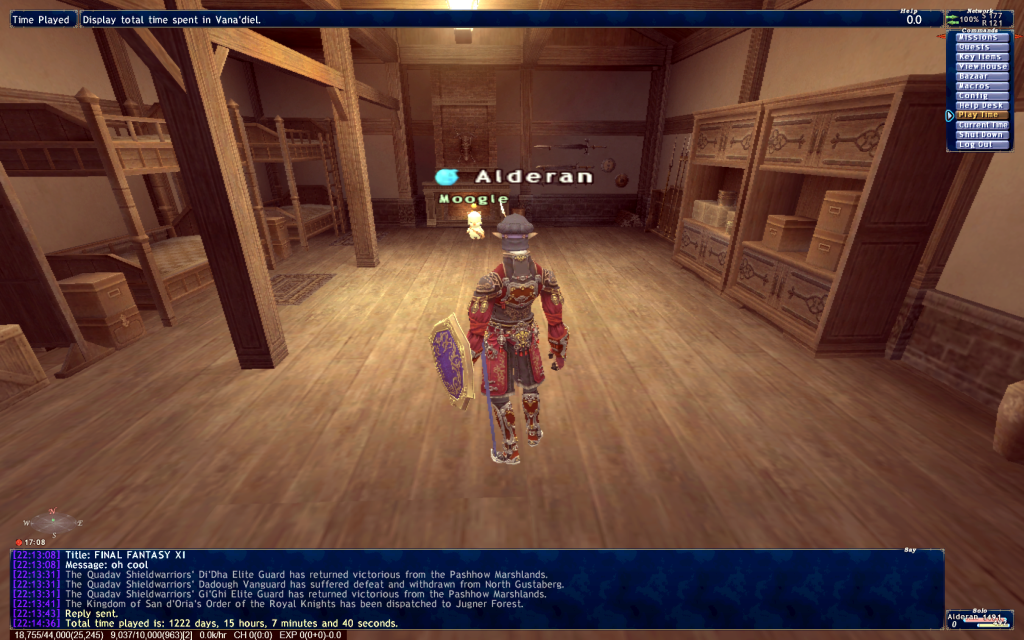 It was a different time back then when we had to be on call 24/7 for world spawns, obviously not counting when we were at work.  That is, unless you had a job where you could play from work, which i didn’t.  It was also a time when we never really logged off due to setting up bazaar’s to sell goods tax free outside of town.  Let’s also not forget the amount of AFK time spent at world spawn camps pretty much just reading forums and gossiping over Vent/TS.  I’d say only a third of that time was actually spent playing the game which would still make it my most played MMO.