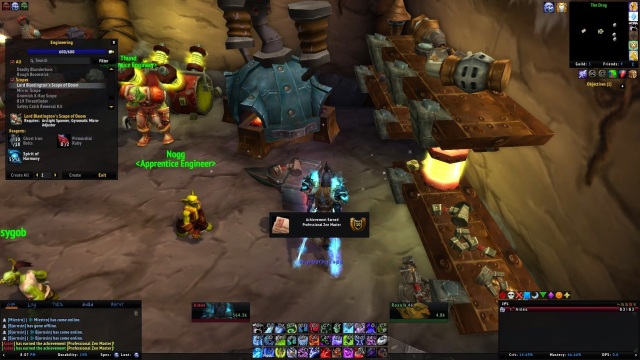 I hate crafting.  In reality, i dislike crafting in its current form in MMO’s.  I suppose i have a certain old school view of what crafting should be and how far we’ve deviated from that.  When crafting is easy and everyone can do it, then it becomes a pointless endeavor that’s simply a disguised money sink.
I’ve always felt crafting should be this difficult and long journey that only a select few dedicated players would ever actually reach max level in.  Something that requires an entire guild funneling materials to a certain person to help them along and in turn be rewarded with badass items that were out of reach of mere mortals. That exclusivity is what’s missing.  That goes for a lot of other aspects as well, not just crafting.
So i decided to suck it up and level my first profession ever in WoW and i of course chose engineering.  It made the most sense from a DK perspective if only for the availability of Synapse Springs.  While a minimal increase to DPS, it’s still an increase and that’s all i was looking for.  Crafting some interesting mounts, including the chopper mount, factored into my decision as well of course.  Then Blizzard decided to ruin my fun with the 6.0 Alpha patch notes! 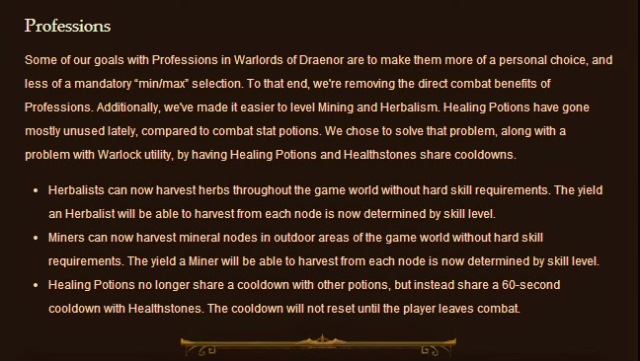 I can’t complain i suppose.  At the end of the day, i’ll have some cool mounts and new pets.  What more could a DK as for?  Army of the Dead back?!