Posted on May 16, 2014 by Ald Leave a comment
I used to be a tank in the olden days.  I loved the reliance everyone had on me as well as the utter impossibility to get anything done without me.  I loved keeping people alive and saving the day when everything that could go wrong inevitably did go wrong.  I was the hero and loved every bit of it.

Tanking used to be different, oh so different.  As a tank in FFXI, i didn’t really lead the group or dictate the pace of battle.  That task was left to the puller which was usually a Ranger or Thief.  A great puller made the flow of battle so smooth and relaxing.  They’d have the task of timing mob repops and keeping an eye on the groups’ mana. 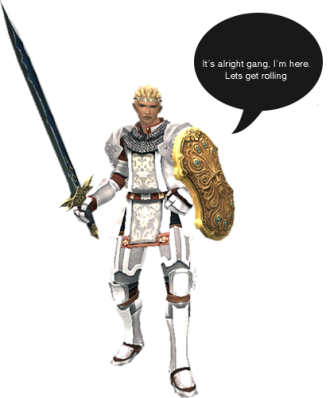 Yes mana was the number one aspect of almost all successful activities back then.  It was difficult to keep and made support classes as valuable as tanks.  Mana kept the group alive, obviously, but it also played a huge factor in tanking.  Taunts were relatively weak and sparse in comparison to a good heal. Taunting was just another threat tool and nothing automatic like it is today.  Heals were more powerful than taunts as a threat mechanic back then.

Every action and spell had enmity numbers associated with them.  Managing and balancing them well as a tank separated the good from the bad.  If you didn’t have mana then good luck keeping your healers or dps alive.  Threat management was a real issue back then.  Today it seems completely arbitrary and i understand why.

Encounters back them were so ridiculously simple that the term “tank and spank” pretty much covered the extent of every single encounter.  Managing threat and mana was the real encounter and usually the boss was secondary.  Do you have threat on the boss?  Is it debuffed to hell and back?  Do you have a support class in group to give you mana back?  If so then you were golden as long as you the tank stayed alive.

Today it’s all about the encounter and mechanics of the boss instead of the mechanics of the class.  I find it so much more refreshing battling that instead of the limitations of the class or group.  There’s dozens more aspects to worry about now as a tank environmentally, but the act of tanking itself is so much easier.  There is lies the problem and the point of my post.

Tanks have either completely forgotten the basics or never had to learn them in the first place.  I’m going to go with never had to learn them because i refuse to believe they’ve forgotten.  It completely drives me bonkers having to watch tanks not understand the basic concept of turning mobs away from a raid group. It’s so much more efficient for 24 other players to move instead apparently.  There’s no more tank pride for “randoms”.

I’ve also seen countless tanks run ahead of the group without initiating and sort of ready check, only to drop to zero in seconds.  The inevitable rage and rant about how it’s the healers fault somehow always follows.  Of course next comes the tank leaving the group knowing they can just get an instant queue with another group.  Ah yes the current dungeon queue system heavily contributes to this as well.  While there’s normally some sort of cooldown penalty for leaving, it still leaves groups waiting around.

My final pet peeve is the tank that doesn’t know the encounter.  I’m not talking about ones that have never done them before because everyone has to start somewhere.  I completely understand those situations and do what i can to help them advice wise.  No, i’m talking about the tank that joins raids and proceeds to say “i don’t know this fight”.  What that essentially does is waste the time of 20+ other players.  I’m fully aware that there are a large amount of players that refuse to look up videos or read up on mechanics before attempting them.  As a tank, you cannot do that.  It’s unfair to everyone else that expects you to lead them.

I’ve come to the conclusion that many new tanks I’ve run into have little interest in actually tanking or leading.  They’re using the current system to their advantage to find groups instantly and pushing the responsibility onto someone else.  They’re just leveling a tank to get gear which they have no intention of using.  They’re just trying to get another class to max level to add to their collection.  It’s their right to do so of course but i hate it.  Since there’s no longer any accountability or reputation, i don’t expect anything to change.

* Before every tank i know kills me, this is about pick up group tanks.