Posted on September 17, 2014 by Ald Leave a comment
It never ceases to amaze me how so many players seem to go through a new MMO launch as if it were their first.  The never ending cries of queue this and queue that, fail this and fail that.  In the immortal words of Terry Tate office linebacker “that ain’t nothing new baby.”  Every new MMO launch I’ve been a part of had queues and ArcheAge is no different.  Why it seems to surprise people at this point is beyond me.

I recall sitting in queue for 8 hours when Aion launched.  Players abused the auto afk system by creating jumping macros so they’d never get booted off.  When Rift launched there were constant 2-3 hour queues which were sort of helped along by client crashes.  The Old Republic was unplayable on release.  GW2 sort of made it better with the overflow server system but i spent more time on that server than my own the first entire week of launch.  Hell, i’m currently playing WoW and i still hit queues in the evenings on my server.

The bottom line is that this should be expected at this point and getting angry about it is silly.  If anything, i assume that i won’t be able to log in on launch and i find something else to do.  Ironically though, i had no issues logging in once the ftp accounts were turned on.  None until prime time of course which is to be expected.

My goals for launch day were pretty simple.

– Create Han Solo or something resembling him.  Check!

– Get my horse Sirdidymus.  Check! 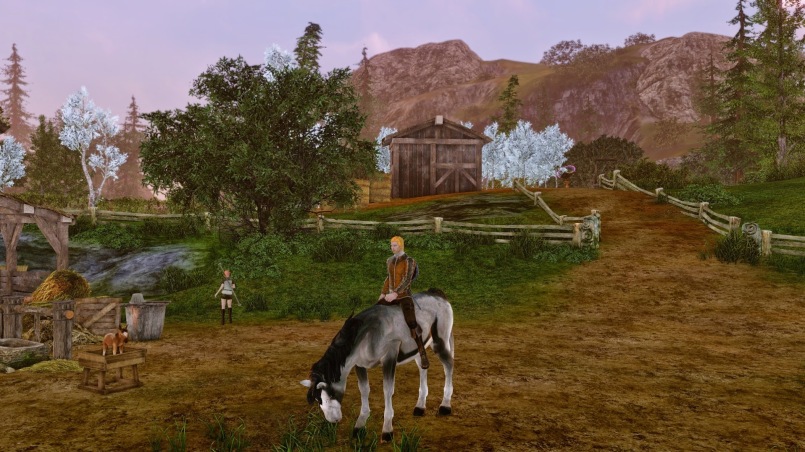 That’s pretty much as far as i got.  The evil queue monster got me when it came time to make some dinner.  I’ll probably do some scenery runs tomorrow and begin working on my build a bit more.