Glory of the Icecrown Raider 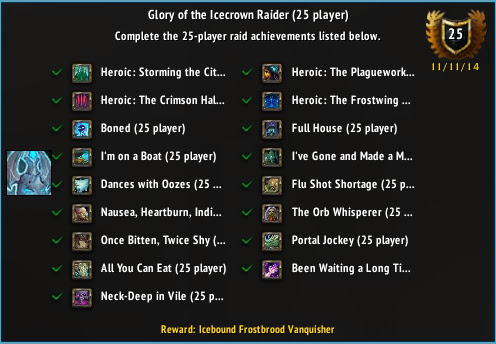 I’ve been slacking and putting off finishing my Icecrown achievements for what feel like six months now. That’s half the time I’ve been playing the game! Every time i got the motivation to get my butt in there and do it, something else came up or i just decided to put it off another week. Well it’s finally done and i can move on to some other raids. Well damn, i guess that’s not really true since i still need to complete the 10-man version. Oh well.
The final achievement proved to be more of a pain than i had anticipated. I had to trick a friend into coming with me to make the Necrotic Plague stacking go quicker and smoother. That part was surprisingly simple but the RNG of the damn knock back managed to kill us a few times. Even perfectly positioned on top of the throne with our back to the wall, we’d get punted to the side and off the platform. After a few more attempts and with adds dying quicker, we pulled it off.
The most difficult aspect of the entire encounter was managing to not accidentally kill the Lich King. That damn legendary cape did way to much uncontrollable cleave damage and needed to be removed. Once we got our act together, it was smooth sailing. I can add another mount to my growing collection. Now it’s either 10-man Icecrown or 25-man Ulduar up next. Let’s see which one i put off for another six months.