Is there any better feeling than helping someone? That warm and fuzzy feeling rushing all over you as you do your good deed for the day? That satisfying “thanks a bunch” at the end that sends you into the clouds? Why yes there is! It’s called doing all that while also being rewarded through no fault of your own for being in the right spot at the right time.
In my case, i was helping a buddy of mine a while ago get back into WoW after a long hiatus. A break that lasted longer than i’ve actually been playing ironically. He needed assistance with a pesky rare spawn that was giving him trouble. Being the good guy that i am, i rushed out there for something that took me longer to get to than it took to actually kill. I’m sure everyone has been in that situation before. Feeling like you wasted your time. Well this time the good deed police were watching. 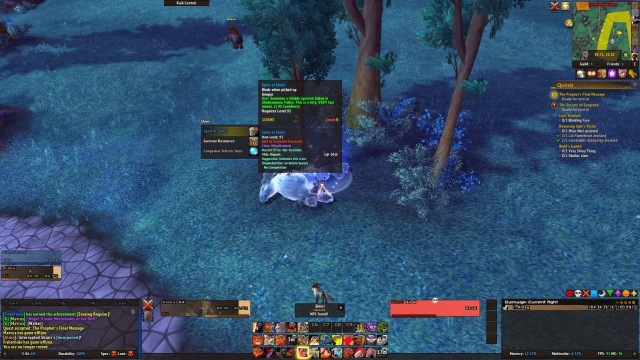 On my way back to my garrison i was fortunate enough to run across Shinri, a rare spawn. I had no idea what it dropped other than some resources and possibly some blue junk. All i knew was i hadn’t killed it before so the completionist in me stopped for a second to grab the kill. To my surprise when the loot window came up, i was looking at a new mount. It wasn’t a typical mount since it stayed in my bag rather than going in my mount tab, but it was a new mount nonetheless. Had i not ventured out to assist my buddy, i probably wouldn’t have stumbled across this rare. That warm and fuzzy feeling was strong that day. John Bender would ridicule me to no end. Blaugust continues.

John Bender: But face it. You’re a neo maxi zoom dweebie, what would you be doing if you weren’t out making yourself a better citizen? – The Breakfast Club (1985)