In typical me fashion, i ended up missing the first ever Pantheon pre-alpha gameplay stream on Friday evening due to working late. I still could have watched it live but would have been unable to participate in the discussion and ask all the questions that i had. I decided to wait until i got home and watch the recording instead. There’s logic in there somewhere i think. Either way i was not disappointed with the game in its current form. I do wish i could have participated in the chat as i have more questions now than i did a few days ago. That’ll have to come another time.

First, let me correct myself and add that this is “pre” pre-alpha footage. The game is a long ways away and the current iteration will of course change and hopefully be improved upon. Regardless of how far along development  may actually be, i was surprised that some of the basics seem to be in play form already. By that i of course mean group interactions in a PVE environment. This is the most important aspect of any MMO for me. I so despise watching solo gameplay of one class fighting one mob whenever a new game is shown for the first time. I could care less about that and would rather see how the group dynamic works. 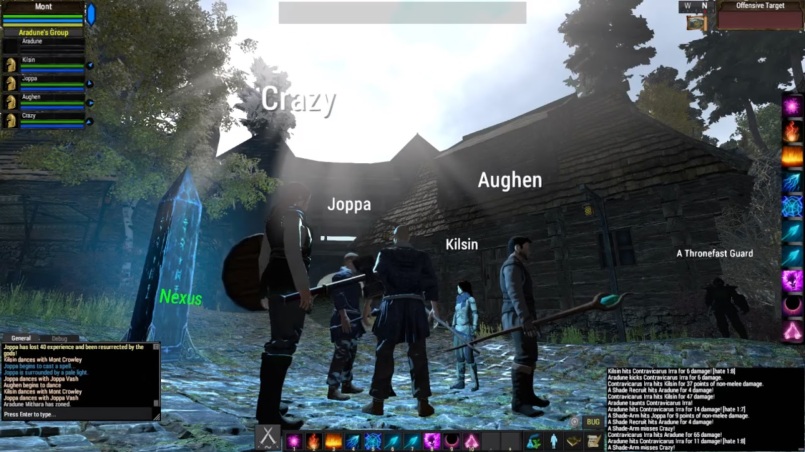 So far it seems to work exactly how i imagined it would, Some will say this sort of gameplay is simply too old and outdated to work and, more importantly, be fun. I of course disagree and really liked what i saw. Taking into account that this group was around level seven in this video, it gave me a nice glimpse into what early grouping is going to be like. What can i say other than seeing the feature i’m most excited for relieved some of my concerns. There are others though of course.
More surprising than anything is how modern the interface appeared. I’m sure these may all be placeholders for now but i hope they remain and become improved as well. I was worried we’d get some sort of terribly clunky interface all for the sake of either EQ nostalgia or some sense of stubbornness many old school players seem to have. So far i’m not seeing that, which is another positive in my book. Everything appears to be clean, simple, and without clutter. The way all basic interfaces should be. I do need my floating damage numbers though as i’m a very visual person and i don’t enjoy having to stare at a chat log for them.

I’m also pleased at what appears to be a group size of six. I’ve been championing this number for over a decade as my preferred group size. I’m not a fan of five or the most recent four man group/party size as that limits the roles players can bring and also limits the kinds of encounters and mechanics devs can implement. Now it’s not definite that the group size was locked to this number or if that’s just how many players happened to be around at the time of the stream. It could be larger for all i know but i’m glad it’s not smaller. I’m more than happy what the group size could mean for expanded roles.

With those expanded roles will come crowd control and buffs. I loved seeing all the deaths that occurred due to the lack of said control as well as mobs not resetting. Both mechanics i personally enjoy and seeing devs struggle with them gives me some hope. I know these are not everyone’s cup of tea but then this game isn’t for everyone. That’s a good thing as far as i’m concerned.

I do have some negativity to throw towards the animations. However, i also understand that the emphasis of this really early iteration is the basic core everything else will be built upon. Animations and spell effects come later in the process so i’m not really worried about them right now. I’m also not expecting a lot in regards to them later on either. They’re expensive to produce and with this game being niche and crowd funded, i don’t expect AAA level of polish.

This is a very good first step in the development cycle for Pantheon. While we already had some proof of concept as well as early gameplay videos, this actually looked like a game with mechanics for the first time to me. Hopefully this builds some sort of momentum and brings in some much needed funding. I’m personally not a fan of supporting any game financially before it’s complete but i’ leaning towards making an exception for this. I like what i see so far.