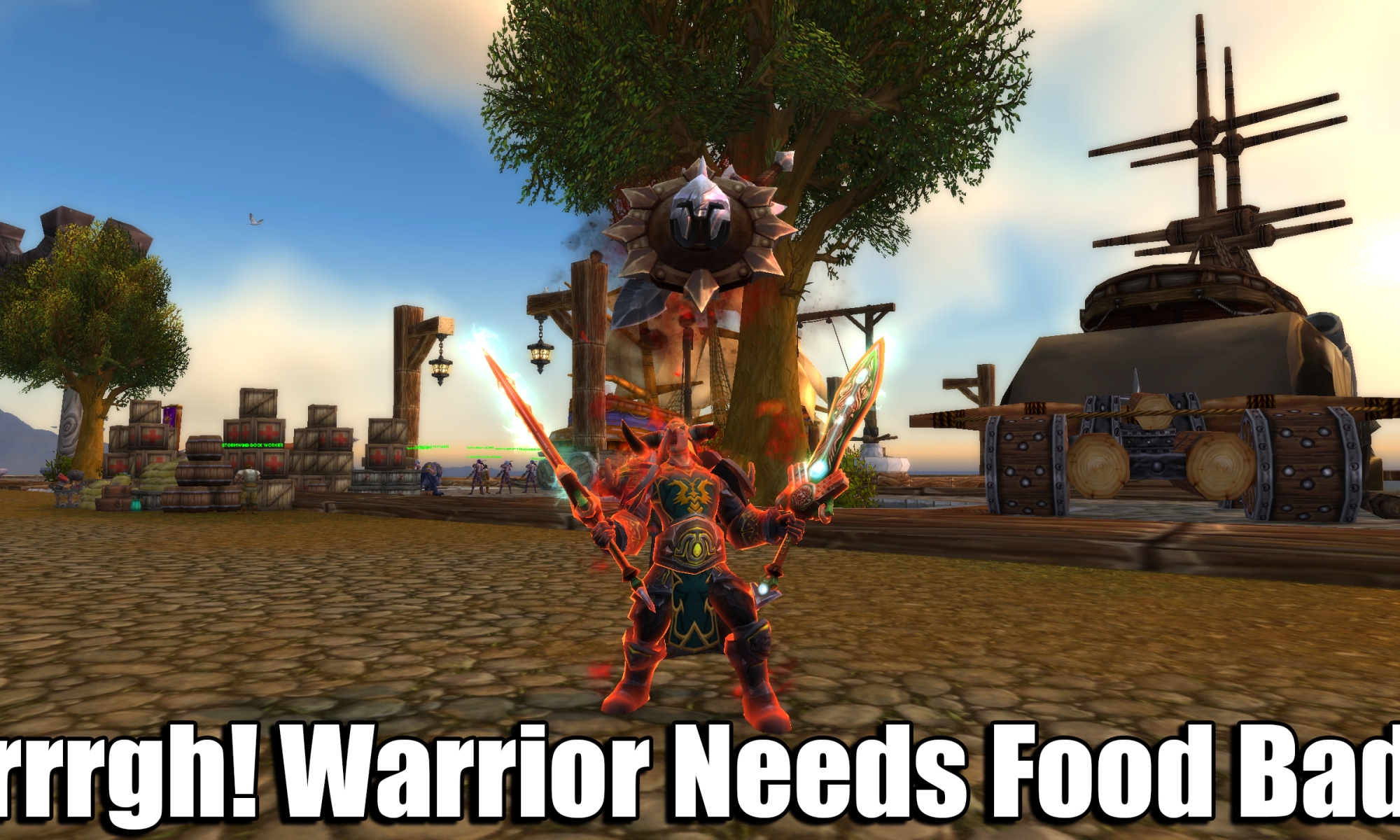 After spending yesterday discussing how i thought BfA may not be worth playing, i thought i’d spend today talking about which class i’m going to play in said expansion! I mean that totally makes sense if you think about it for a while. What good is an expansion not worth playing if you don’t pick a class to play in it! It’d be like not picking a class and still trying to play. Now that my logic is out of the way, i’ve narrowed the choices down to two classes – Warrior and Death Knight. Casters and ranged classes just don’t do it for me.

This shouldn’t be a shock to anyone as i’ve mained a DK since i started playing WoW and i love plate dps classes. Warrior was always something i’ve leveled on the side and sometimes did dungeons and raids with, but only on alt runs or pugs. This time around i’m actually considering playing one as my main. I’m not the type of player that changes mains every expansion based on which one tops the dps meters. In fact, i’ve never changed mains from my DK in all my time. The argument i have with myself on which one to play always comes down to this –

I’ve always been a DK vs. Warrior is more fun

Now just by going with that ridiculous line of thought, one would think the choice was obvious, but it’s not in my case. I have this silly attachment to the DK class that i struggle letting go of it. It’s not just WoW in fact, i tend to play a Dark Knight in Final Fantasy XI/XIV and a Shadow Knight in EQ2. I just dig the playstyle in general and the aesthetics help a lot as well. I have to make a choice though so let’s get into my opinions so far. Now i’m not going to completely decide until i hit 120 on both since i don’t think the pre-patch is a good indicator of what either will be at max level. Beta testers be damned!

Lets start with DK since i know it so well. I’m probably leaning towards Unholy for group content at this time but i actually enjoy all three specs. I normally level as Blood so i don’t have to worry about anything. I typically run up to a quest area and pull as many mobs as i can all in one shot. This makes questing semi fun for me when normally it would bore me to sleep. Frost is an option as well and will come down to which performs better for whatever i’m doing.

I’m leaning towards Unholy due to its mechanics and having a few ranged attacks that should help with staying on target should i need to run around all willy-nilly. The downside as always with DK’s is they scale horribly, they’re slow as molasses,  and resource management early on leads to downtime where i have nothing to press. All of these are the major reasons i’m even considering changing mains for the expansion. They’re serious class flaws that i’ve dealt with for as long as i can remember.

Now the Warrior…what can i say. It’s the darling of the pre-patch and pretty much all of beta as far as i can tell. I fear it’ll be the new flavor of the month class along with Warlock but that won’t even enter into my decision making process. Of course when i say Warrior i mean Fury. It’s superb. Everything about it is what i enjoy from a melee dps standpoint. There’s always an ability to press and everything is fast paced and just flows.

Sure it’s simple – you just hit whatever’s off cooldown with a few priorities of course. There’s always the amazing mobility as well. A comparison can’t even be made between these two classes as far as that’s concerned. One has mobility and the other doesn’t even know what the word means. Then there’s the fantastic scaling as the expansions go on with Warriors. They always get better which makes me feel like i’m actually getting stronger. Arms is pretty enjoyable as well in my opinion.

So far i see no downside as far as playstyle or mechanics are concerned. My only issue is with Protection. I don’t think i’m ever going to play this spec so that makes the class useful to me on only 2 of the 3 specs. That’s not a deal breaker by any stretch but it is a concern. In fact since i don’t ever tank anything worthwhile anyway, i may just toss this one out of the window and call it a draw.

That’s pretty much where i stand so far. Do i go with familiarity, poor scaling, no mobility, and sometimes clunky mechanics or do i go with the opposite of all those as well as fun? The choice seems obvious but i think it’s too early to tell. I’ll wait and see how they play out at 120, but chances are i’ll be playing both. Not having to worry about an artifact weapon to level should allow me to do both without much stress. Although, if i’ve learned anything from my time in the arcade in the mid 80’s, it’s that warriors always need food badly. Another strike against!