Half In The Bag

We’re at the halfway mark of Blaugust Reborn and it has finally sunk in what an enormity trying to post every single day is. For me it’s very unnatural and almost feels like i’m forcing myself to do something i really don’t think i should do. Don’t get me wrong, i actually enjoy the challenge but only if it’s during Blaugust once a year. There’s no way in hell i would subject myself to this on a daily basis. I have so much respect for those bloggers can can and do post with such frequency. Kudos to you, you nutjobs! You’re all crazy in your own way.

While so far i’ve managed to post every 16 days now, i’ve had a few close calls. My issue usually deals with a hectic work schedule that sometimes has me working way later than i normally would to meet deadlines. The irony isn’t lost on me, believe me. Some time last week i was actually out of town for most of the day and only made it home with minutes to spare. I know i still could have posted something from the road but all my screenshots are on my gaming PC and i feel wrong doing so without accompanying media. Although if i get into a situation when it’s going to be text or nothing, then i’ll post a wall of text and say screw it.

Thankfully this week we’ve had a new expansion to talk and post about so that’s made it much easier. At the same time, i’m sure everyone is already tired of BFA post after BFA post. Me personally, i’ve been taking my time and haven’t even hit 112 yet so it’s still fairly fresh for me. I haven’t gotten to the stage of hating these posts yet from anyone. I’m actually curious how everyone is handling the expansion so far and what they think of it. Bring on more BFA posts i say! 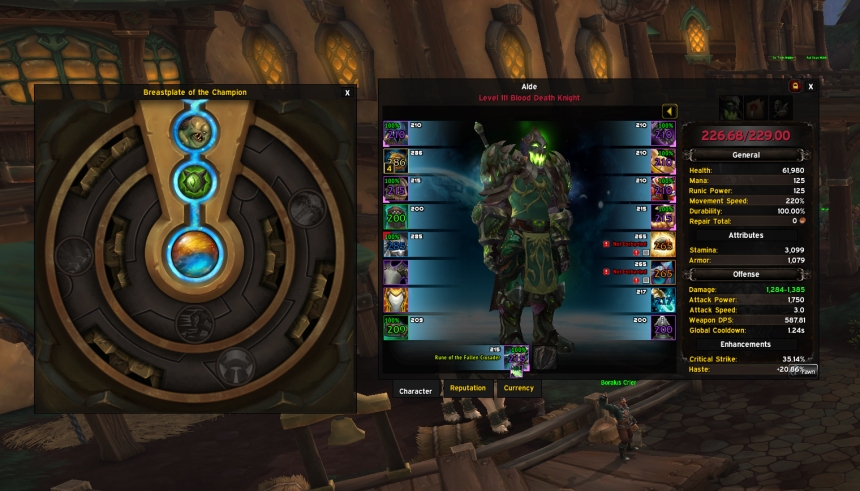 I’ve only now hit level four on my heart and filled out three traits on my only piece of Azerite gear, my chest. I’m actually not sure when i’ll be receiving more pieces but i assume i have some more leveling to do beforehand. What’s really important is my transmog is spot on while i level and equip new pieces. I can’t look all mismatched and disheveled or the townfolk won’t respect me. I certainly wouldn’t if i were them! The journey to piratedom continues. The quest for Blaugust immortality awaits!