One of the aspect of GW2 i absolutely adore is the dye system. I wrote about this in a post dating back to 2013 shortly after the game was released. It’s hilarious looking back because i assumed some other game would come along or maybe an active one would have adopted this feature and improved on it by now. No dice there and i don’t understand why. I still think it’s by far the best system of dying ones armor but i think it could be improved upon. 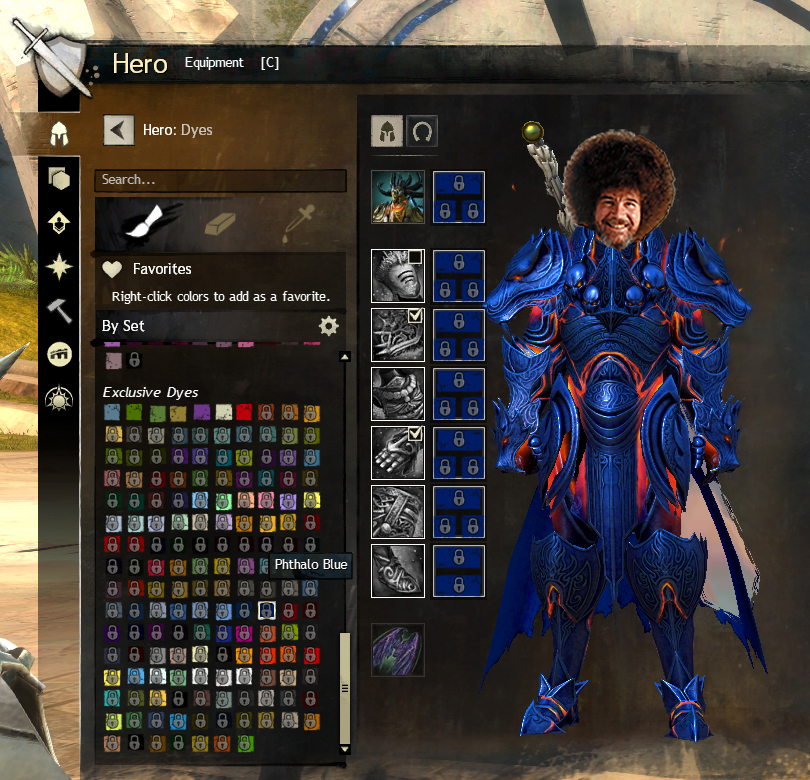 I see what you did there ArenaNet

The obvious way i would do this isn’t with more dyes, as there are probably too many as it is. Back in 2013 i was rocking 366 dyes and as i type this i’m just barely over 400. My count hasn’t really gone up much over that span and most of that has to do with not playing that often during that stretch. Still, i don’t think the dyes i’ve gotten since then ever make their way on to any of my armor. Basically, the colors i had back then are pretty much the same ones i usually default to now. So more dye options are nice by not necessary.

Instead i’d try and build a system that allows me to dye more parts of any certain piece. I believe GW2 allows for a max of four parts but most of my items are either three or only two. Those are still nice options but more is always better in this case. Why stop at armor? Why can’t we dye weapons and back pieces as well? I understand the logistical or artistic design nightmare this would be but find a way dammit! I could sit here for hours messing with all my gear to get that perfect complementary color scheme. On second thought, i may never get to actually playing if i had all these options. You know what? I’m willing to risk it. Make it so!