We’re in the home stretch here folks and i’ve somehow managed to not go completely bonkers. Well to be honest, it’s not really a stretch when there’s only two days left in Blaugust, but i feel better looking at it that way. We’re in the wrap up stage where i reminisce about how my month started and where i managed to end up. It certainly wasn’t where i expected, that’s for damn sure.

I began the month with the intention of spending most of my MMO time playing the new WoW expansion and basically spending every day posting about it. I stupidly thought the timing was perfect, with Blaugust just starting, i’d have lots to share and compare with everyone else probably playing it as well.  That plan blew up in my face rather quickly haha! Good thing i stink at sticking to plans. Hannibal Smith would be disappointed with me.

As i’ve posted about early on, the expansion just didn’t click with me and neither did the game overall to be frank. I have no ill feelings towards it and i’m happy people are enjoying it. I actually contemplated whether i should continue playing something i wasn’t enjoying just to have blog topics to discuss. I’ve done that in the past unfortunately and it has never ended well for me and nor should it. I’ve realized as i’ve gotten older that it’s just not worth doing something like that even if it means losing readers or even gaming friends. So i made the switch over to GW2 this past month.

I set out a goal for myself to level a new class and somehow gear him up in ascended armor. Well the level part was rather easy since i just bypassed that part by buying the expansion and getting a free level 80. The second part was not very difficult either, it just required a larger time investment in doing Silverwastes train farms and meta events. Again nothing really special, just playing the game and saving up my mats. Speaking of mats, i also had to level my Tailoring in order to craft myself a full set. Well my full light armor set is finally complete having just crafted my pants and i couldn’t be happier. Two main objectives down and about a million new ones to go. 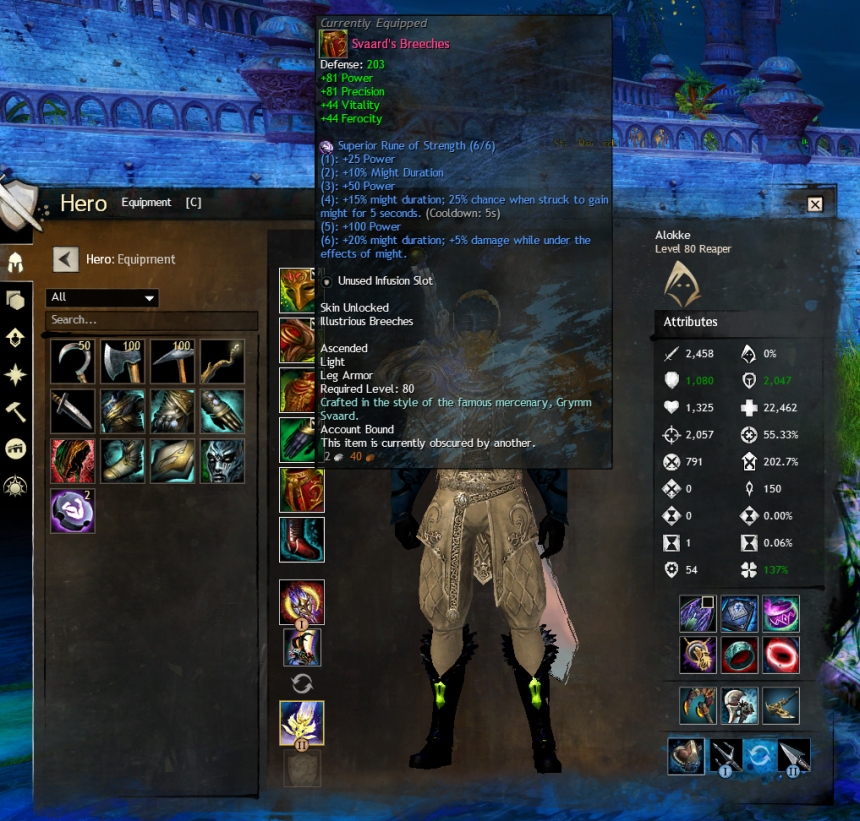 I also just started on Living World Season 4 story quests which brought me to Domain of Istan map for the first time. It’s quite a pretty zone although mob density may be a bit over the top for my liking. I know i’m pretty far behind but i don’t think it really matters in the overall context of the game. I did read about season 5 possibly being around the corner and i’d like to hit that running when it releases so i’m going to get my butt in gear. Hopefully i’ll be able to unlock my roller beetle mount soon as well as i believe it’s the next chapter of the story. I’m slowly making progress but i’m also enjoying myself so i have no regrets about deciding to get back into the game.

Lastly and most importantly, i’ve managed to set up my Reaper in a sort of bright green outfit that thematically makes sense. At the same time, i’m not sure if it does because all i can see when i look at him is something from Asgard. Perhaps Odin or Loki or even Heimdall? I can’t really put my finger on who he reminds me of but i love the look and i think i’m going to stick with it for a while. It’s been a hoot getting my bearings and getting back into Fashion Wars full time. I’m going to see how long my excitement lasts but so far so good. On to the next challenge in game and with my blog. I’m going to try to keep it going long after this month is over.